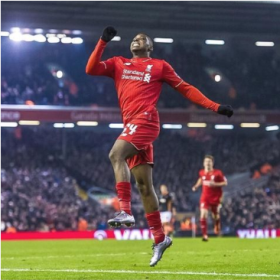 The Nigeria Football Federation have set the wheels in motion to secure the international futures of Crystal Palace star Eberechi Eze and Liverpool-owned winger Sheyi Ojo.
Manager Gernot Rohr has missed out on the services of Arsenal wonderkid Bukayo Saka and Chelsea striker Tammy Abraham but the German, who relies on players with dual nationality, is hoping to convince some exciting English-based talents to pledge their allegiance to the Super Eagles.
Reading playmaker Michael Olise was the headline name on the Super Eagles roster for last month's Africa Cup of Nations qualifying matches against the Republic of Benin and Lesotho, even though he was put on standby.
The Nigerian Federation through their scouting team have been in contact with Everton winger Alex Iwobi to give them a lowdown on the English-based dual-eligible players being courted.
"Recently they get to ask me about so many players in England now, I feel like the scouting now has improved with Nigerian players based in England," Iwobi said on Nedum Onuoha's podcast.

"I have been asked couple of questions, for example about Ebere Eze, Sheyi Ojo, about so many other players they are looking to get in. I feel like it is improving."
Ojo was a key member of the England squad that won the 2017 U20 World Cup while Eze played for the Young Lions at last month's European U21 Championship.
Ojo shares the same Nigerian agent as Joe Aribo, Josh Maja, Iwobi and Ola Aina, who have been capped by Nigeria.
Ifeanyi Emmanuel
Photo Credit : liverpoolfc.com
Copyright ANS