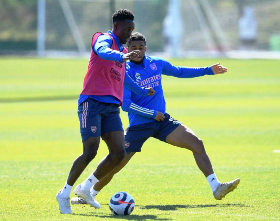 Arsenal have concluded their preparation for Sunday's Premier League meeting against Fulham at the Emirates Stadium in London.
Everything is pointing to the fact that Nigeria-eligible striker Folarin Balogun has put pen to paper on a new contract with Arsenal, considering that his fortunes have changed over the last one week or so.
The 19-year-old was pictured training with the Gunners first team in their final workout at London Colney before the visit of the Cottagers.
If selected in the matchday 20 by manager Mikel Arteta, it would be his first-ever squad involvement for a Premier League game.
Though Balogun has not been included in Arsenal's 21-man Premier League squad list for the second half of the season, he is eligible to feature in the top-flight as he is an U21 player.
Arsenal captain Pierre-Emerick Aubameyang is unavailable for selection as he continues to recover after contracting malaria on international duty, pushing Balogun up the pecking order of strikers.
The England youth international, who made his debuts in the Europa League and League Cup this season, has directly participated in three goals (2 goals and 1 assist) in six first-team games.
Ifeanyi Emmanuel
Photo Credit : arsenal.com
Copyright ANS