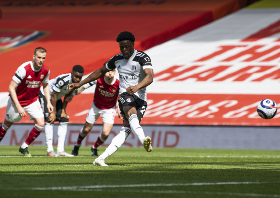 Bordeaux loanee Josh Maja was on the verge of being the match winner but Fulham suffered a cruel blow, drawing 1-1 with Arsenal at the Emirates Stadium on Sunday afternoon.
Fulham manager Scott Parker included the Super Eagles striker, Ola Aina, Tosin Adarabioyo and fit-again Ademola Lookman in the starting lineup, while Folarin Balogun missed out on the Gunners matchday 20, though he was spotted training with the first team on Saturday.
The Cottagers were looking for their first away win in the Premier League against Arsenal but it was not to be as
Eddie Nketiah tapped into an empty net to equalise for the home team in the 97th minute.
Maja had scored a penalty to give the visitors an unlikely lead just before the hour mark which breathed life into Fulham's survival bid this season, and they defended and defended but finally Arsenal found a way through.
Fulham players looked distraught as they made their way out of the Emirates Stadium turf.
On the back of this draw, Fulham remain six points from safety and they have now five games left to play.
Lookman and Maja were substituted in the 69th and 77th minute respectively, while 2017 U20 World Cup winner Josh Onomah remained rooted to the bench.
Igho Kingsley
Photo Credit : fulhamfc.com
Copyright ANS
All rights reserved. This material, and other digital content on this website, may not be reproduced, published, rewritten or redistributed in whole or in part without prior express written permission from allnigeriasoccer.com