...the complete Nigerian football portal
Subscribe
Newcastle legend Shearer has his say on big chance missed by Maja in first half vs Arsenal
Published: April 18, 2021 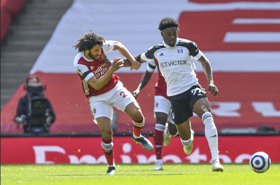 English Premier League all-time top scorer Alan Shearer has had his say on Josh Maja's missed scoring opportunity during the first half of Fulham's 1-1 draw against Arsenal at the Emirates Stadium on Sunday afternoon.
In the 21st minute, the Cottagers were close to taking the lead when a deflected shot landed on the path of the Super Eagles striker, whose snapshot caught the heel of Rob Holding and went inches wide of the post.
In a half Fulham struggled to create chances, they would have taken the lead heading into the interval if Maja had converted from 16 yards out.
Newcastle United legend Shearer thinks Maja missed the chance to score because he didn't have a good balance when he took the shot.
Speaking on Premier League Productions at half-time, he said : "He had a very good sight of the goal, this really is the only sight of goal that Fulham had got but he just struggles to sort his feet out.

"He can't get them to react quick enough then he sort of scuffs it, then it takes a deflection and relief for Arsenal that it goes past the post.

"If you just watch him when the ball comes, I know it comes quickly but he's got to quickly try and move his feet a little bit quicker and you have a better balance."
Maja had not scored in eight consecutive matches for Fulham before they visited the Emirates Stadium.
His 59th minute goal against Arsenal took his tally in the Premier League to three in eleven appearances.
Ifeanyi Emmanuel
Photo Credit : fulhamfc.com
Copyright ANS
All rights reserved. This material, and other digital content on this website, may not be reproduced, published, rewritten or redistributed in whole or in part without prior express written permission from allnigeriasoccer.com