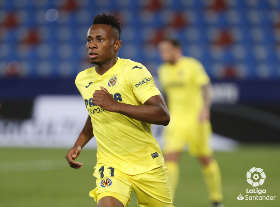 Samuel Chukwueze boosted his chances of being named in Villarreal's starting lineup for their important games ahead after bagging a brace in their 5-1 rout of Levante in a La Liga clash at the Estadio Ciudad de Valencia on Sunday evening.
The victory took the Yellow Submarine to 49 points in the Spanish top-flight and kept alive their hopes of finishing in the European places.
Unai Emery's team got ahead very quickly as Sergio Postigo turned Mario Gasper's cross into his own net in the ninth minute, before in-form striker Gerard Moreno doubled the advantage with a brilliant effort.
Levante managed to pull a goal back through Mickael Malsa before the interval.
In the 63rd minute, Chukwueze swept the ball home to make it 3-1 and it was followed by an even better effort at minute 75 - the last goal of the game.
Against Levante, the Nigeria national teamer netted his first brace in La Liga since his debut back in the 2018-2019 season.
Up next, Villarreal face Deportivo Alavés in their next domestic fixture on April 21, eight days before hosting Arsenal in the semifinals of the Europa League.
Igho Kingsley
Photo Credit : laliga.com
Copyright ANS