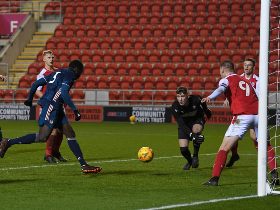 Nigeria-eligible defender Mazeed Ogungbo was the hero for Arsenal as they came from behind to register a 2-1 victory in a London derby against Chelsea in the U18 Premier League on Tuesday afternoon.
The Republic Ireland youth-teamer was picked in the starting lineup along with Miguel Azeez, defender Zach Awe and goalkeeper Ovie Ejeheri, while winger Joel Ideho was introduced off the bench in the 64th minute.
Chelsea fullback Derrick Abu entered the game as a substitute with twenty minutes remaining.
It was all square at the break as Marcelo Flores found the net to cancel out Soonsup-Bell's opening goal.
Three minutes after the restart, Ogungbo scored what proved to be the winning goal.
The 18-year-old has now scored three times for Arsenal U18s so far this season, with his other strikes coming against Tottenham Hotspur in the league and Rotherham United in the FA Youth Cup.
Arsenal will face Chelsea again in the reverse fixture at Cobham on May 1.
Igho Kingsley
Photo Credit : arsenal.com