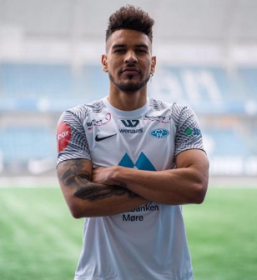 Norwegian champions FK Bodo/Glimt have firmed up their interest in Norwegian-Nigerian striker Ohi Omoijuanfo by submitting a bid to Molde, according to reports.
Bodo/Glimt have seen their initial bid to sign the former Manchester City trialist rejected.
In 2020-2021, Omoijuanfo racked up eleven appearances in European competitions for Molde, scoring four goals, and was involved in both legs of the Europa League group stage games versus Arsenal.
"There has been a dialogue with Glimt, they have asked about Ohi, but it has not resulted in any agreement, " says Molde director Ole Erik Stavrum to eurosport.no (via Aftenposten).
Over the course of three seasons at Molde, after arriving from Stabæk, the 27-year-old netted 33 goals and had 11 assists in 73 matches.
Omoijuanfo, whose other clubs include Holmlia, Lillestrom and Jerv, earned his solitary Norway cap under former Nigeria manager Lars Lagerbäck, in a friendly against Sweden in 2017.
Ifeanyi Emmanuel
Copyright ANS