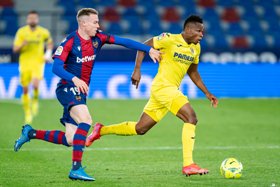 Samuel Chukwueze has picked Sevilla loanee Bryan Gil, Barcelona's Ansu Fati and Villarreal's Yeremi Pino as the three La Liga prospects to keep an eye on.
The Nigeria international, winner of the bronze boot at the 2015 FIFA U17 World Cup, burst into the scene as a teenager under manager Javier Calleja in the 2018-2019 season and has since gone on to make 115 appearances for the Yellow Submarine with a goal involvement of 32 (16 goals, 16 assists).
Barcelona's youngest scorer in history Fati was having another strong season, netting five goals in ten appearances, before suffering a long-term injury which has kept him on the sidelines since November 2020.
SD Eibar winger Bryan Gil, 20, has established himself as a starter for Los Armeros and played two competitive matches for Spain last month, while the 18-year-old Pino has pushed himself into the limelight with several fine performances off the bench for Villarreal.
Speaking to El Periódico Mediterráneo, Chukwueze was asked to name a young LaLiga Santander player to watch out for in future and he responded : "There are many good players in LaLiga. You have Bryan Gil, Ansu Fati and Yeremi Pino in Villarreal CF.
"For me, I would choose Yeremi, he is a fantastic player. He is a young boy, he has speed and talent, and the most importantly, he is working very hard. "
On the most talented player he has played with at Villarreal, Chukwueze said : "It has to be Santi Cazorla, he is a fantastic player who can play very well with both feet. He is special and has a lot of talent."
In 2019, Chukwueze was nominated for the Kopa Trophy and Golden Boy - awarded to the best player under the age of 21.
Ifeanyi Emmanuel
Copyright ANS