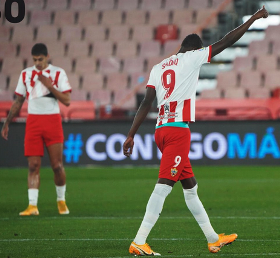 2016 Rio Olympics bronze medalist Umar Sadiq is the second most used played by Almeria coach José Manuel Gomes in the Spanish Segunda Division this season.
It will be recalled that Sadiq was named in the Nigeria squad for last month's Africa Cup of Nations qualifying matches with the Republic of Benin and Lesotho, but was prevented from linking up with the national team due to coronavirus concerns.
The 24-year-old would have missed up to three LaLiga 2 matches - against Leganes, Malaga and Rayo Vallecano - if he had traveled to Africa in March.
Sadiq has logged 2,446 minutes spread across 31 matches in the Spanish second-tier, including 27 starts, and only Iván Balliu (2,463 minutes) was in action more than the Nigerian.
He is Almeria's leading scorer in the league with 16 goals, has another two in the Copa del Rey and netted six goals for Partizan Belgrade before his move to Spain in October, taking his tally for the season to 24 goals in all competitions.
Seven matches to the end of the regular season, Almeria's promotion hopes are very much still alive as they occupy the third position in the standings with 61 points.
La Liga side Sevilla are keeping tabs on Sadiq ahead of a potential swoop when the transfer window reopens for business.
Ifeanyi Emmanuel
Photo Credit : udalmeriasad.com