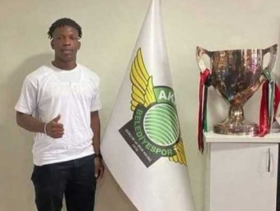 Martins Chisom Onyebueke is at the center of a transfer scandal in Turkey amid claims that he is not a genuine footballer.
According to various reports in the Turkish media, Evren Ozbey, president of First League club Akhisarspor, has complained to the Turkish Football Federation that Onyebueke is not a footballer.
Born in 2001, Onyebueke, who claims to be a midfielder, joined Akhisarspor in the January transfer window, signing a deal until the end of the 2020-2021 season.
The 20-year-old was issued with a license by the TFF on February 1,  with the Federation stating "transition to professionalism without being an amateur" as license type since there was no information about the clubs he previously represented.
It is unclear how Onyebueke got documentation to play in Turkey.
He has not been involved in any of the thirteen matches played by Akhisarspor since transferring to the club and has not been named in a matchday squad.
Out-of-favor Super Eagles midfielder Raheem Lawal and striker Peter Nsima are bona fide players of Akhisarspor.
Igho Kingsley
Copyright ANS