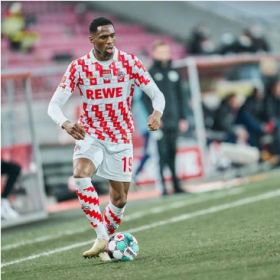 Super Eagles coach Gernot Rohr has revealed that Cologne defender Kingsley Ehizibue has not yet been capped by Nigeria due to administrative problems.
Born in Munich, the exciting right-back qualifies to represent the national teams of Germany, Netherlands and Nigeria, where his father hails from.
Ehizibue has played a non-binding game for Netherlands U21, back in March 2016, and received a call-up for the Africa Cup of Nations qualifiers against Sierra Leone last March which were later postponed owing to the coronavirus crisis.
According to Rohr, the 25-year-old has to give up his Dutch citizenship before acquiring another nationality.
"Kingsley has administrative problems, Kingsley was born in Germany and then he was a refugee and he had to go to the Netherlands and he got a Dutch passport," Rohr explained to Elegbete TV Sports.
"Now if he takes another passport, for example Nigerian passport, he must leave the Dutch passport. He cannot have double passports, this is the only problem."
Rohr went on to reveal that he held positive talks with Ehizibue and claims the player is willing to represent the Super Eagles.
"I met him in Cologne, I saw him with his agent and the boy wants to play with us but if he's playing with us with the Nigerian passport he will lose the Schengen passport and he cannot because in his team he cannot play without the Schengen passport so this is only an administrative problem".
Ehizibue has struggled in his second season with Cologne in the German Bundesliga, making fourteen out of a possible 31 starts in the division, whereas he made waves in 2019-2020.
Ifeanyi Emmanuel
Photo Credit : fc.de
Copyright ANS