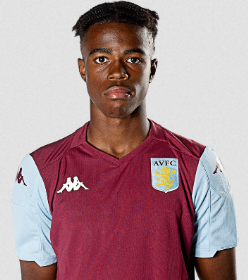 A plethora of European clubs, including English Premier League teams,  are interested in signing Aston Villa wonderkid Carney Chukwuemeka in the summer.
According to the Guardian UK, Manchester United and Manchester City are keeping tabs on the Anglo-Nigerian midfielder who previously likened himself to Red Devils star Paul Pogba.
City and United could be competing with RB Leipzig, Monaco and PSV Eindhoven for the signature of Chukwuemeka, with the three non-English clubs also keen on the player.
Aston Villa coach Dean Smith rates him highly, so much so that he has been named in two matchday squads for Premier League games this season - against Leicester City and Manchester City.
Three months ago, Chukwuemeka was in contention to make his professional debut in an FA Cup clash vs Liverpool but missed out on the opportunity after testing positive for coronavirus.
Aston Villa are aware that bigger teams are planning to lure the central midfielder away from the club and moved fast to tie him to down to a new deal in October 2020 - his first professional deal.
Chukwuemeka has been a player of Aston Villa since 2016 when he made the move from Northampton Town.
Igho Kingsley