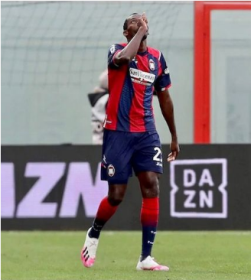 Simeon Tochukwu Nwankwo has insisted that he is not thinking of his future out of respect for Crotone and their fans.
It is a foregone conclusion that the Nigeria international will depart the Sharks in the summer as they are doomed to relegation, with 18 points in 33 games, five matches to the end of the 2020-2021 season.
It would be difficult to imagine Simy playing in the Serie B next season after putting himself in the shop window with a string of fine performances this campaign.
Speaking to Sky Sport Italia shortly after the meeting against Parma, Simy said : "I don't think about it. I have too much respect for my people to talk about the future : now I can't think of anything else".
With his brace against Parma, Simy broke the Nigerian record for most goals in the Serie A, a record that stood for fifteen years and previously held by ex-Inter Milan wonderkid Obafemi Martins.
While it took Martins 86 games to reach 28 goals, Simy racked up 29 goals in fewer matches (77).
On equaling and beating Martins' record in the same game, he said : "Reaching such goals in a very difficult championship like the Italian one is nice , but I can't be 100% happy.
"The team counts. We are struggling and I can't be happy. "
Simy, who has played nonstop at Crotone for five consecutive seasons, as been linked with possible moves to clubs in the Serie A, Spain and Belgium.
Ifeanyi Emmanuel
Copyright ANS