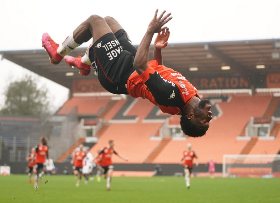 Super Eagles hopeful Terem Moffi bagged a hat-trick as Lorient beat Bordeaux 4-1 in a French Ligue 1 clash at the Stade du Moustoir on Sunday afternoon.
Heading into the fixture, the former KV Kortrijk man had returned to form, either scoring or assisting in his last three matches in the division, and he showed no signs of slowing down today.
Yoane Wissa netted in the eighteenth minute to break the deadlock and the home team were celebrating again two minutes later when Moffi netted his 12th league goal of the season.
Lorient turned defence into attack when they won the ball in their own half; Wissa pounced on a defence-splitting pass before rolling the ball across to Moffi, who calmly slotted home.
Two minutes before half-time, the Nigerian tallied his second of the game, knocking the ball past the onrushing goalkeeper after Trevoh Chalobah's long ball over the top released him.
Having missed the last four games due to fitness issues, Nigeria international Samuel Kalu came off the bench in the 54th minute - his first match since March 14.
Moffi completed his hat-trick in the 80th minute to make it 4-0, claiming his first match ball since his transfer to the French Ligue 1 last October.
Following their win, Lorient have a four-point advantage over 18th-placed Nantes with four games left.
Igho Kingsley
Photo Credit : fclweb.fr
Copyright ANS