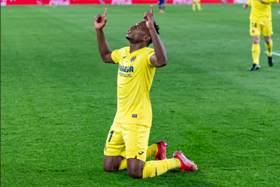 Former Barcelona winger Andrea Orlandi has heaped praise upon Samuel Chukwueze, revealing that the Nigeria international was Villarreal's most dangerous player during their 2-1 loss to Barcelona in a La Liga clash on Sunday.
Chukwueze broke the deadlock when he took advantage of the mishap in the Barcelona defence, did very well to round goalkeeper Ter Stegen and slotted home after a lovely ball in behind from Pau Torres in the 26th minute.
Barcelona defenders Jordi Alba and Pique found it difficult to contain the Villarreal winger and Alba was one of the players at fault for the goal scored by the number 11.
Orlandi noted that the left-footed Chukwueze found joy playing in his preferred position as an inverted winger.
In his post-match analysis on La Liga TV, Orlandi said : "Samuel was a handful, it was very difficult to cope with him. It was right Koeman said they were taking risk man-to-man at the back, there's a moment Alba had where he slips, obviously it's a 1v 1 situation.

"Going back to Samuel he's an exciting player but his preferred side is the right one, today this is where he played.

"Gerard Moreno had to play sightly more centrally, closer to Paco Alcacer and they left the whole left hand side to Alberto Moreno."
He added : "In the first half, Samuel was the most dangerous player, in the second one there was a ball from him as well into the path of Gerard Moreno and Villarreal had a good chance so he was involved in everything that Villarreal did positive going forward.

"He's such an exciting player, he's still very, very young, there is still room for improvement, tactically for me he has to improve."
In the current season, Chukwueze has appeared in 27 matches in the Spanish top-flight and has contributed to seven goals (4 goals, 3 assists).
Ifeanyi Emmanuel
Copyright ANS