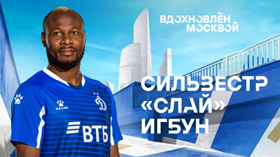 Sylvester Igboun's agent has reacted to speculation suggesting that the Super Eagles striker is set to depart Dynamo Moscow when the transfer window reopens in the summer.
Igboun, who first made his name in Europe with Danish club FC Midtjylland, has found game time few and far between since completing a permanent transfer to the Muscovites last summer.
The 30-year-old has started five out of a possible thirty matches in all competitions this season, logging 696 minutes spread across 20 games.
A rib injury kept him off the pitch for more than two months in the first half of the season.
"While Igboun plays for Dynamo. I can't say yet what will happen in the next transfer window," Allan Beck said to Sport Express.
Igboun enjoyed a successful loan spell at Dynamo last season, making 23 starts in the Russian top-flight.
Sly will enter the final twelve months of his contract with the White-blues in July.
Igho Kingsley
Photo Credit : fcdynamo.ru
Copyright ANS