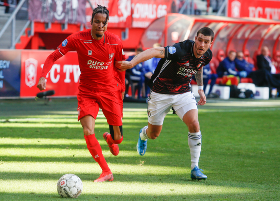 FC Twente insider Leon ten Voorde  has explained why Portuguese set up Benfica will not lower their asking price to sell Tyronne Ebuehi in the summer.
The Nigeria international returned to the Netherlands last summer, joining Twente on loan for the whole season, with an option to buy included in the deal.
Ebuehi impressed in the first half of the season but his performances have dropped in recent weeks, leading to speculation that Benfica would be forced into selling the fullback for a lower price.
"He also relapsed. No, that transfer fee will remain on it," Voorde explained to Tubantia.
"At Benfica they really don't watch every game. There they just look at the length of the contract, what did we pay for it and what does he earn?
"Then there is just a million transfer fee. It will and can never pay FC Twente."
Ebeuhi joined Benfica as a free agent in 2018 and he is under contract there until the end of the 2022-2023 season.
Ifeanyi Emmanuel
Photo Credit : fctwente.nl
Copyright ANS