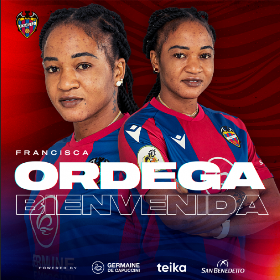 With a statement on their official website, Spanish Primera División outfit Levante UD Femenino have announced the signing of Nigeria international Francisca Ordega.
A three-time World Cupper with the Super Falcons (2011, 2015 and 2019), Ordega has put pen to paper on a deal until the end of the 2020-2021 season plus two more years, keeping her at Levante until June 2023.
The 27-year-old will compete with highly-rated Spanish-Nigerian teenager Andrea Okene Bañón for one of the attacking spots at Levante.
Ordega has Primera División experience under her belt, having defended the colours of Atlético de Madrid during part of the 2017-18 season, playing a total of eight games in the Primera Iberdrola.
Her other clubs include Bayelsa Queens and River Angels in her homeland, Rossinyaka (Russia), Pitea (Sweden), Washington Spirit (United States), Sydney FC (Australia) and Shanghai Shenhua (China).
Levante, who are second in the standings, host Sevilla in their next competitive match on May 2.
Igho Kingsley
Photo Credit : levanteud.com
Copyright ANS