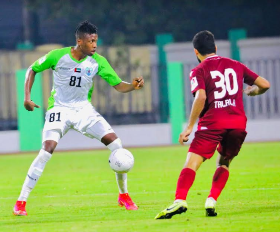 Bolu Pascal, 20, is gradually showing the stuff he is made of in the United Arab Emirates.
From Right2Win Sports Academy, to FC Zimbru in Moldova, then to Khor Fakkan before joining Dibba Al-Hisn, Pascal is growing on a path that could see him become one of the hottest young Nigerian attackers in football.

With a decent pace, clear vision and a terrific eye for goal, Pascal is expected to begin next season on a high when he finally returns to his parent club, Khor Fakkan.

Clubs in mainstream Europe are already jostling for his signature, meaning the next few months will be key in his football career.

The player himself reflected on his exploit in the United Arab Emirates and has promised to continue working hard irrespective of where he's playing his football.