...the complete Nigerian football portal
Subscribe
'I wanted to use Arsenal to make money' - Nigerian tycoon opens up on failed bid to buy Gunners
Published: April 29, 2021 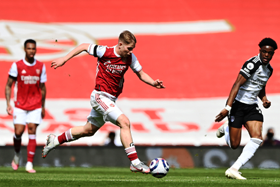 Senator Orji Uzor Kalu, the founder of SLOK Holdings and former Abia State Governor, has opened up about his failed bid to buy Premier League club Arsenal.
Kalu expressed his interest to buy Arsenal but the owners were not willing to do business with the Nigerian tycoon.
Arsenal owner Stan Kroenke is under pressure to sell the club following his role in the controversial European Super League and results on the pitch have not been up to par in recent seasons.
Kalu has shown his passion for football, with Nigerian Professional Football League club Enyimba, backed by the then governor of Abia State, winning the Champions League twice - in 2003 and 2004.
"Honestly I'm not an Arsenal fan, I wanted to use Arsenal to make money because it's business," Kalu told reporters.

"I put a bid before and asked them to sell the club, they were not serious in selling the club.

"I pray that they will listen to voice of nature, I sent them an interest, they just replied me and said we will come back.

"I think this is what the problem is, we were serious, backed up by one of the biggest banks in America to do this bid."
Since Kroenke bought a stake in Arsenal in 2007, they have won four FA Cups and last played in the Champions League in 2016-2017.
Ifeanyi Emmanuel
Photo Credit : arsenal.com
Copyright ANS