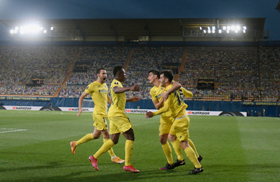 Villarreal midfielder Manu Trigueros has rued their missed chances to put the Europa League semifinal clash beyond Arsenal on Thursday night.
The Yellow Submarine were clearly superior in the first half, netting through Trigueros and Albiol, but they will take a slender one-goal advantage to London with Nicolas Pepe halving the deficit from the spot in the 73rd minute.
Villarreal's inability to score a third goal at home may prove costly as the Gunners need only one goal without reply in the second leg to go through to the final.
On the hour mark, Chukwueze was in the right place to have  a strike at goal but Arsenal goalkeeper Bernd Leno made an important save to deny the Nigeria international.
Speaking at the post-match press conference monitored by allnigeriasoccer.com, Trigueros stated : "Like you said we played really well, we were 2-0 up at half-time. After that in the second half we tried to control the midfield a little bit more.

"We had a couple of chances to put the tie to bed but then we couldn't capitalize on those chances.

"We had some chances in the first half. Gerard had one and Leno has made a great save, Chukwueze had a great chance as well but they have great players with great individualities."
Chukwueze was in fine goalscoring form before the visit of Arsenal, netting three goals in his last three games in La Liga.
Ifeanyi Emmanuel
Photo Credit : uefa.com
Copyright ANS
All rights reserved. This material, and other digital content on this website, may not be reproduced, published, rewritten or redistributed in whole or in part without prior express written permission from allnigeriasoccer.com
Latest News