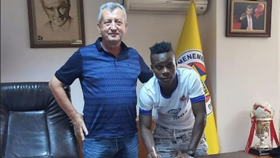 Former Nigeria U20 international Ibrahim Alhassan Adamu will play no part when Menemenspor take on Ankara Keciörengücü on game week 33 in the Turkish First League on Saturday, May 1.
Through a press release, Menemenspor stated that Adamu has been excluded from the playing staff with the decision of the board of directors due to his undisciplined behavior.
In the current season, the defensive midfielder has appeared in 27 matches in the second-tier and has one assist to his name.
On the field of play, the former Flying Eagles star also has a poor disciplinary record, picking up ten yellow cards, has been sent off once, and missed two games as a result of a yellow card suspension.
The 20-year-old joined Menemenspor in August 2020 from another First League club Altay SK.
A product of Kano Pillars, Adamu was a key member of the Flying Eagles squad to the 2019 U20 AFCON, going the distance in all their five matches during the tournament in Niger, but missed out on the World Cup roster.
Igho Kingsley
Copyright ANS