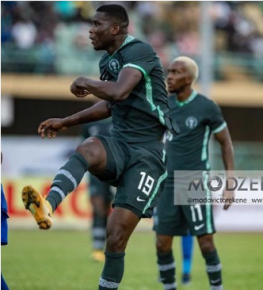 Retired Belgium international Imke Courtois has revealed that Paul Onuachu is a better striker than Club Brugge star Bas Dost.
The two center forwards have enjoyed breakthrough campaigns with their respective clubs.
While the Nigeria international has 30 league goals to his name in 2020-2021, Dost has tallied eight in the second half of the season after transferring from Eintracht Frankfurt.
Club Brugge general manager Vincent Mannaert recently stated that he would not want to exchange Dost for Onuachu, but Courtois has a different opinion.
"But I still think that I would prefer Onuachu, top scorer and also an important point of contact, over Dost," Courtois stated in De Zondag via Voetbalnieuws.

"But I think Lang-De Ketelaere is better than Bongonda-Ito."
Onuachu's goalscoring exploits this season have seen him linked with a summer departure from Racing Genk, with Lyon among the clubs credited with an interest.
Igho Kingsley
Copyright ANS