...the complete Nigerian football portal
Subscribe
'What a shame' - Diego Maradona Jr. criticises referee for ruling out Osimhen's 'goal' vs Cagliari
Published: May 02, 2021 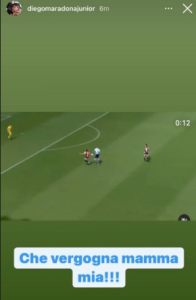 Diego Maradona Jr., the Italian son of late Argentina star with the same name, has taken to social media to criticize the referee for ruling out Victor Osimhen's goal during Napoli's 1-1 draw with Cagliari on Sunday afternoon.
Osimhen gave Napoli the lead when he controlled the ball and fired past goalkeeper Alessio Cragno with a left-footed shot after a brilliant ball over the top by Lorenzo Insigne in the thirteenth minute.
Eight minutes into the second half, the Nigeria international thought he had doubled the advantage but the goal was disallowed by referee Michael Fabbri as he was adjudged to have fouled Cagliari defender Diego Godin.
Nahitan Nandez netted deep into stoppage time to rescue a point for the visitors.
Maradona, who played for the youth team of Napoli, believes that Osimhen's effort should have been allowed to stand.
Translated from Italian, Maradona Jr.said on his Instagram stories, 'What a shame, my mother', adding that he fell in love with the wrong sport.
Osimhen, who was replaced in the 76th minute due to a head injury, has now scored six goals in his last ten matches in the Serie A after netting only twice in his previous ten.
Ifeanyi Emmanuel
Copyright ANS