...the complete Nigerian football portal
Subscribe
Ex-Nigeria U23 invitee who played on same Man Utd team as Rashford on target in Denmark
Published: May 03, 2021 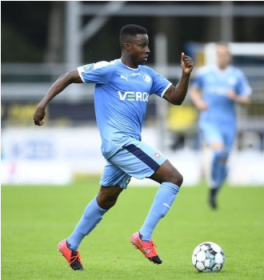 Former Nigeria U23 invitee Tosin Kehinde helped Randers register a 4-2 win over Brondby in a Danish Superliga clash at the Cepheus Park Randers on Sunday by getting on the scoresheet.
In doing so, the talented winger ended a nine-game goal drought in the division, having failed to find the net since the home draw vs Nordsjaelland, prior to yesterday's meeting.
Hjörtur Hermannsson, with a header, gave the visitors the lead in the 16th minute but Kehinde netted in the 29th minute to bring the game back to parity.
The Manchester United academy product tapped into an empty net when the ball was laid on a plate for him by Vito Hammershöy-Mistrati.
The Lagos-born Kehinde was a key member of United's UEFA Youth League squad for the 2015-2016 season - a team that contained current first team stars Marcus Rashford, Scott McTominay, Dean Henderson and Axel Tuanzebe.
The 22-year-old Anglo-Nigerian has been involved in seven goals (2 goals, 5 assists) in 23 top-flight appearances for Randers in 2020-2021.
Yesterday's clash vs Brondby was Randers' 500th match in the Danish Superliga.
Igho Kingsley
Copyright ANS
All rights reserved. This material, and other digital content on this website, may not be reproduced, published, rewritten or redistributed in whole or in part without prior express written permission from allnigeriasoccer.com