...the complete Nigerian football portal
Subscribe
Campbell namechecks Balogun among four players that will be massively influential at Arsenal
Published: May 03, 2021 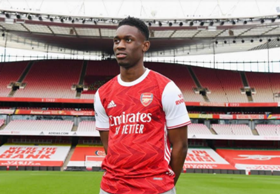 Former Gunners striker Kevin Campbell has namechecked Folarin Balogun among four Arsenal youngsters that are going to be massively influential for Arsenal in the coming years.
American-born Nigerian attacker Balogun recently ended speculation about his future by inking a new multi-year contract, keeping him at the Emirates Stadium until June 2025, and Campbell is urging Emile Smith Rowe to follow suit, with his deal set to run out in the next two years.
Ever since he put pen to paper on his new deal, Balogun has been training with Arsenal's first team and was in the traveling party for recent away matches at Villarreal and Newcastle United.
The 19-year-old has flourished when given the chance by first team manager Mikel Arteta, with a goal involvement of three in six appearances spread across 76 minutes.
"Martinelli, Saka and Balogun have all signed. We just need Smith Rowe to put pen to paper and then we are in business," Campbell told Football Insider.
He added : "Those four players are going to be massively influential at Arsenal in the coming years. I cannot think of many clubs that have four better youngsters."
Arsenal could promote Balogun to the first team next season with the futures of strikers Alexandre Lacazette and Eddie Nketiah covered in mist.
Ifeanyi Emmanuel
Copyright ANS