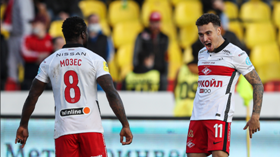 Spartak Moscow have leapfrogged city rivals Lokomotiv Moscow into second place in the Russian Premier League table after beating Arsenal Tula 2-1 on Monday afternoon.
Chelsea loanee Victor Moses continues to show why he should be signed on a permanent basis with another classy performance for The Red-Whites.
The visitors took the lead through Aleksandr Sobolev, with the former Nigeria international providing the assist for his goal in the 21st minute.
Moses showed excellent footwork and change of direction to beat Arsenal Tula's Nikolay Rasskazov before sending a delightful cross to Sobolev, who guided his header past goalkeeper Egor Shamov.
An own goal from Ilya Kutepov in the 45th minute ensured both teams were level going into the interval.
Thirteen minutes from time, Spartak Moscow striker Jordan Larsson capitalised on an assist from Moses to score what proved to be the winning goal.
Moses controlled a long pass with his chest, then beat his marker, before laying the ball on a plate for Larsson to slot home from close range.
The 2013 Africa Cup of Nations winner has been involved in four goals (2 goals, 2 assists) in his last seven matches in the Russian Premier League.
Ifeanyi Emmanuel
Photo Credit : spartak.com
Copyright ANS