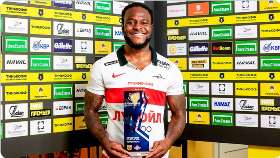 Victor Moses was the hero for Spartak Moscow as they registered a hard-fought 2-1 victory over Arsenal Tula in a Russian Premier League match at the Arsenal Stadion on Monday afternoon.
The former Nigeria international was deservedly handed the Man of the Match accolade (pictured) after his two brilliant assists helped the Muscovites secure a win.
It was an important victory for Spartak Moscow as the win sees them climb to second in the table - the last Champions League spot - with 53 points accumulated, two matches to the end of the season.
Moses set up the goals scored by Aleksandr Sobolev and Jordan Larsson in the first and second half respectively.
Speaking post-match, the Chelsea loanee acknowledged that Arsenal Tula were difficult opponents and his team showed character to pick up the three points.
"I try to do everything in my power to help the team," Moses told Match Premier Channel (via Sport Express).

"The main thing is that we took three points. The game was not easy. The field was hard.

"Showed character, both team and individual, and they deservedly took three points."
Spartak Moscow, whose destiny is in their own hands in terms of finishing second in the table, face Khimki and Akhmat Grozny in their last two games of the season.
Igho Kingsley
Photo Credit : spartak.com
Copyright ANS