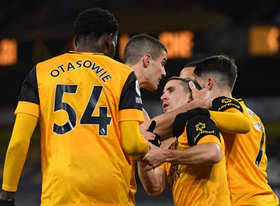 West Brom and Wolverhampton Wanderers shared the spoils with a 1-1 draw in a Premier League clash at The Hawthorns on Monday evening.
Super Eagles defender Semi Ajayi put in a full shift for the Baggies, while Nigeria-eligible youngster Owen Otasowie made only his second Premier League start of the season.
The implication of this scoreline is that West Brom are close to a return to the Championship as they are ten points from safety with four matches remaining.
Fabio Silva gave Wolves the lead just before the half-time whistle but Mbaye Diagne restored parity after the hour mark and the home team couldn't find the breakthrough to win it.
Former Chelsea and West Brom midfielder Andy Townsend praised Otasowie for giving a good account of himself during the 71 minutes he spent on the pitch.
The 20-year-old is pushing to break into Wolves' starting lineup, making the matchday squad for Premier League games on 23 different occasions this season, which is a testament to how highly he is regarded at the club.
Speaking during commentary on the Premier League world feed as Otasowie was being substituted, Townsend said :"He moves with the ball nicely, has lots to learn, it's still very early in his career with Wolves.

"But nice, really easy on the eye, plenty enough for him this evening, now someone very different Podence.

"Plays between the lines very well, was busy, extremely lively."
New York City-born Otasowie has played one non-binding game for his country of birth United States, against Wales in a friendly in November 2020, but remains eligible to wear the colours of Nigeria and England.
Ifeanyi Emmanuel
Photo Credit : wolves.co.uk
Copyright ANS