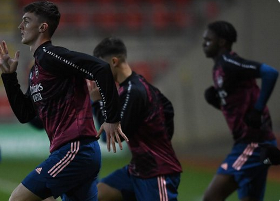 Arsenal face a fight on their hands to keep hold of talented Anglo-Nigerian teenager Ethan Nwaneri amid interest from other Premier League giants, according to reports.
Arsenal youth team guru Jeorge Bird writes on his website that Manchester United and Chelsea have both frequently expressed interest in signing Nwaneri.
A midfielder by trade, he has been tipped to force his way into the Gunners U18s team next season, if he remains at the Hale End Academy.
Nwaneri has been described as excellent technically and a good dribbler while also possessing an impressive tactical understanding of the game.
This season, he has featured heavily for the U15s and despite his age he is one of the standout players for the U16s.
Nwaneri becomes eligible to sign a scholarship deal at Arsenal before the start of the 2022-2023 season.
Arsenal have already lost the services of another promising midfielder of Nigerian descent in Bayo Fapetu, who has agreed a scholarship deal with Derby County for next season.
Ifeanyi Emmanuel
Photo Credit : arsenal.com
Copyright ANS