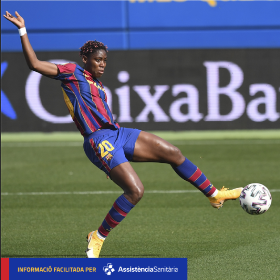 Barcelona Femení are sweating over the fitness of influential striker Asisat Oshoala, eleven days before they take to the pitch against Chelsea in the UEFA Women's Champions League final.
The ‎Primera División giants issued a medical bulletin about the fitness of the Nigeria international on Wednesday morning, stating that she is on the sidelines due to a sprained left ankle.
Thus, the former Arsenal and Liverpool center forward has been omitted from Barcelona's roster for Wednesday evening's Copa de la Reina quarterfinal clash against Sevilla at the Estadio Jesús Navas.
Last month, Oshoala was sidelined by a foot injury for three weeks but was able to overcome the setback in time for the Champions League semifinal clashes against Paris Saint-Germain .
As expected, Barcelona have not indicated her recovery period but she is now rated as doubtful for the Champions League final at the Gamla Ullevi (Göteborg) on May 16.
The four-time African Women's Footballer of the Year has been outstanding in this season's Champions League, with four goals to her name, bettered only by four players, namely Barcelona's Jennifer Hermoso (6), Chelsea's Fran Kirby (6), Barcelona's Lieke Martens (5) and Manchester City's Sam Mewis (5).
Igho Kingsley
Photo Credit : fcbarcelona.com
Copyright ANS