...the complete Nigerian football portal
Subscribe
'He has been electric' - Ex-Chelsea captain hails Iheanacho as Leicester striker nets vs Newcastle
Published: May 07, 2021 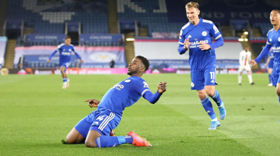 Leicester City suffered a blow to their top four hopes as they went down to a surprise 4-2 defeat to Newcastle United at the King Power Stadium on Friday night.
There were starts for Kelechi Iheanacho and his international teammate Wilfred Ndidi, with the midfielder lasting 63 minutes on the pitch and the striker going the distance.
Goals from Arsenal loanee Joe Willock and Paul Dummett saw the Magpies establish a two-goal lead at the break.
It was 3-0 in in the 64th minute as Callum Wilson scored after rounding goalkeeper Schmeichel and the number 13 destroyed any hope the Foxes had of a comeback when he netted his second of the game on 73 minutes.
Marc Albrighton sent a powerful strike into the top corner to make it 4-1 in the 80th minute and Iheanacho further reduced the deficit seven minutes later with an accurate strike through the legs of Matt Ritchie.
The Super Eagles striker has now scored ten goals in the Premier League since the start of March, more than other player.
Iheanacho is one of the hottest strikers in Europe's top five leagues over the past two months, with only Crotone striker Simy (12) finding the net more than him - that's how good the Foxes number 14 has been.
Speaking during commentary of the game on the Premier League world feed, former Chelsea captain Andy Townsend hailed Iheanacho for his goalscoring form over the past two months, adding that he took his opportunity with both hands when it was presented to him after previously playing second fiddle to Jamie Vardy.
"He has been electric, he really has. All credit to him, it is not easy sometimes for people like Iheanacho to sit and watch people like Vardy, who you know is going to play week in, week out," Townsend said.

"All you can do is when you get an opportunity, when it presents itself, take it and grab it with both hands and my goodness that young man has done that."
Leicester City will need to be at their best for the crucial run-in, with games coming up against three of the so-called big six sides in the shape of Manchester United, Chelsea and Tottenham Hotspur.
Ifeanyi Emmanuel
Photo Credit : lcfc.com
Copyright ANS