...the complete Nigerian football portal
Subscribe
Why Nigerian-born midfielder was omitted from Arsenal squad against West Ham in PL2
Published: May 08, 2021 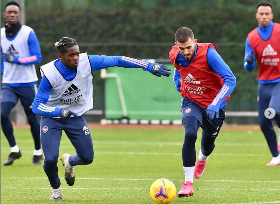 Promising Nigerian-born youngster Tim Akinola is unlikely to be in contention to make his first team debut for Arsenal this season.
Allnigeriasoccer.com can exclusively report that he was not included in Arsenal's matchday squad for their final Premier League 2 game of the season against West Ham United on Friday night due to injury.
Akinola's season is all but over as he is currently nursing a groin complaint.
The central midfielder was an ever-present in Arsenal's matchday squads for EFL Trophy and Premier League 2 games before the derby against West Ham U23s.
The only game he was not given minutes was against Manchester United U23s in October when he was unused substitute.
Akinola is held in high regard within the Emirates Stadium, with manager Mikel Arteta promoting him to first team training on countless occasions this season.
The 20-year-old will enter the final twelve months of his contract with the Emirates Stadium outfit in July.
Real Madrid, Atlético de Madrid, Borussia Dortmund, Juventus and Monaco are among the clubs keeping tabs on the Anglo-Nigerian midfielder with a view to a swoop in future.
Ifeanyi Emmanuel
Copyright ANS