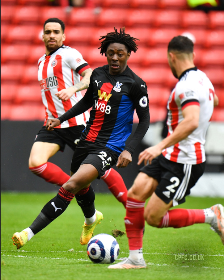 Eberechi Eze was the star of the show as Crystal Palace secured their Premier League safety after a 2-0 victory against already-relegated Sheffield United at Bramall Lane on Saturday afternoon.


Christian Benteke, in the second minute, and Eze in the second half were on target for the Eagles, both of the goals with the aid of fortunate deflections.
Crystal Palace top assist provider in the Premier League with five went on a dancing run and found the Belgium international whose effort was deflected into the net off Blades defender George Baldock.
Two minutes from time, Eze lit up the game when he made a sumptuous run from inside his own half that resulted in a goal, with his shot bouncing into the top corner thanks to a deflection.
Former Chelsea stars turned pundits, Karen Carney and Rob Green, reserved special praise for the Anglo-Nigerian attacking midfielder after his exceptional performance against Sheffield United.
Carney said on BBC Sport's Final Score : "Eberechi Eze has toyed with Sheffield United the whole game so sometimes you deserve a bit of luck - which he got with that deflection.

"He just glides past players. It's effortless. A sensational performance today."
Speaking on Eze's goal, Green said on BBC Radio 5 Live: "It's brilliant and the best bit is the touch at the start. And we've seen it all afternoon with players backing off because they just don't know when to press.

"Eberechi Eze has options. He has Wilfried Zaha and Christian Benteke to pass to. In the end, he just runs forward and grabs his goal."
Eze also netted against Sheffield United in the reverse fixture back in January, a goal that was nominated for the Premier League Goal of the Month.
Ifeanyi Emmanuel
Photo Credit : cpfc.co.uk
Copyright ANS