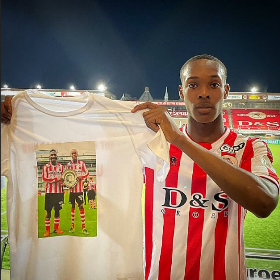 Dutch-Nigerian-Togolese striker Emanuel Emegha has dedicated his first professional goal to his deceased teammate Ousmane Kone.
Sparta Rotterdam thrashed Vitesse Arnhem 3-0 at the Sparta-stadion "Het Kasteel" on Friday, with the former Netherlands U15 international scoring the final goal of the game in the 80th minute, seven minutes after coming off the bench.
The 2003-born center forward played fifteen professional games and logged 346 minutes before netting his first senior goal.
After his goal, Emegha brought out a shirt with a photo of himself and Ousmane Kone, who passed away at the age of twelve.
Explaining why the goal was important to him, he told ESPN via De Telegraaf : "This one is for my deceased teammate. In 2016 he drowned during a team outing. I have never forgotten that and I will never forget that.
"I printed that shirt last week and said to myself: I will score in the next game. It was very special that I also succeeded."
Born in The Hague, the Netherlands to a Togolese father and Nigerian mother, Emegha is open to representing the Nigerian national teams.
Igho Kingsley
Photo Credit : sparta-rotterdam.nl
Copyright ANS