...the complete Nigerian football portal
Subscribe
Super Eagles dazzler Chidera Ejuke back on the scoresheet for CSKA Moscow
Published: May 08, 2021 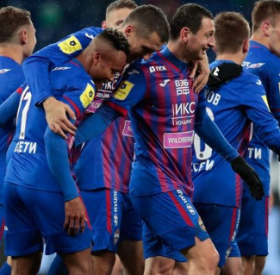 Chidera Ejuke was back on the scoresheet as CSKA Moscow came from behind to defeat FC Krasnodar 3-1 at the VEB Arena on Saturday evening.
The Super Eagles dazzler had not scored in three Russian Premier League games before the visit of Krasnodar, with Sochi, Spartak Moscow and Ufa keeping him at bay.
The visitors opened the scoring through Viktor Claesson in the 26th minute but the lead lasted only six minutes as Ejuke restored parity for the Army Men.
He slotted into the bottom corner of the net after receiving a defence-splitting pass from Ivan Oblyakov in the area.
Fedor Chalov made it 2-1 on 56 minutes before Mario Fernandes sealed the win midway through the second half.
Ejuke had an impressive record last season at SC Heerenveen, contributing to 16 goals in 29 matches but the tricky winger has managed six goal involvements in 32 appearances across all competitions for CSKA Moscow in 2020-2021.
In terms of the league table, CSKA Moscow are sixth with 50 points, three less than Lokomotiv Moscow who occupy the last Champions League spot with one game left.
Igho Kingsley
Copyright ANS