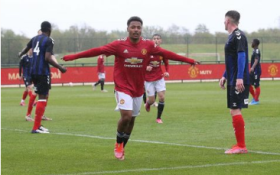 Manchester United's Nigeria-eligible striker Dillon Hoogewerf finished the season by netting his second hat-trick of the campaign in an U18 Premier League clash against Middlesbrough on Saturday.
The Netherlands youth international was involved in four goals during the game at Trafford Training Centre as he provided an assist for United's last goal in a resounding 8-1 win.
In doing so, Hoogewerf reached double figures in goals and assists this term - netting twelve and setting up eleven others in nineteen appearances.
The Dutch-Nigerian made it 2-0 when he headed in a cross from the right from Charlie Wellens in the 33rd minute and netted his second of the game six minutes later when he picked his spot and slotted home from close range.
Two minutes after the restart, it became 5-0 as Hoogewerf fired into the bottom corner to complete his hat-trick.
The 18-year-old has been on a fabulous goalscoring run since April 17, scoring in each of his last five games in the division and tallied three assists during that period.
Hoogewerf's sparkling form has powered United to the top of the U18 Premier League table but the Red Devils won't be crowned champions of the northern section if Manchester City defeat Burnley next Wednesday.
Ifeanyi Emmanuel
Photo Credit : manutd.com