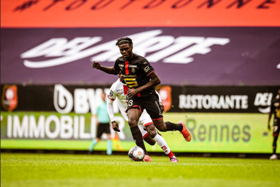 Lesley Ugochukwu, nephew of former Nigeria international Onyekachi Apam, made his full debut for Rennes as they were held to a 1-1 draw by Paris Saint-Germain at Roazhon Park on Sunday night.
With Eduardo Camavinga, Steven Nzonzi and Jonas Martin unavailable for selection, the central midfielder came into the squad and lasted 62 minutes on the pitch before making way for Clément Grenier.
PSG knew that nothing but a win would be good for them in the title race with Lille winning at Lens on Friday, after a disappointing week that saw them crash out of the Champions League
On the stroke of half-time, the defending champions were awarded a penalty by referee Ruddy Buquet after Naif Aguerd was adjudged to have tripped Layvin Kurzawa in the box, and up stepped Neymar to convert it to give Mauricio Pochettino's side a 1-0 lead.
Ugochukwu was disappointed that Rennes conceded a penalty just before the end of the first-half but happy that they had a good second half that saw them bag an equaliser through Sehrou Guirassy's towering header.
"It's a shame that there was the penalty before half-time because the team was pretty well in place," Ugochukwu said to Rennes official website.
"We made a few chances. There is this pre-break game fact ... It's like that. We remained mobilized and it paid off.
"We had a good reaction in the second half. In the end it does not go very far. We can be proud of ourselves. "
Ugochukwu joined Rennes in 2012 after spells with the youth teams of ASPTT Rennes and CPB Nord Ouest Foot.
Ifeanyi Emmanuel
Photo Credit : staderennais.com
Copyright ANS