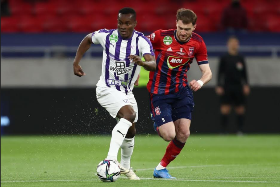 Ujpest defensive midfielder Vincent Onovo is open to playing in the English Premier League after revealing that he is fan of Manchester United.
There is speculation over his future at the Hungarian Cup winners as his contract runs out at the end of next season.
Despite the lure of playing in the maiden UEFA Europa Conference League next season, Onovo has refused to rule out a possible departure from Ujpest.
"Now I play in Hungary, before I used to play in Finland. My contract will expire next year, we'll see in this transfer window what my destination will be," Onovo told allnigeriasoccer.com.

"For the team I support, I have been supporting Manchester United for a long time."
The hardworking midfielder added : "It was great to win the Cup and it was a difficult game in the final. Now that the League has ended, we start preparations for the Europa Conference League.

"The round of sixteen match against Puskás AFC was the toughest game we played in the Cup, it was an away game and we defeated them 2-1."
The 25-year-old Onovo concluded by saying that he is hoping to earn a first call-up to the Super Eagles.
"I have ambition to represent my fatherland Nigeria. Of course if they give me a chance I will come to play for the country.

"It will be a very big honour for me, my family and my friends to see me play for the national team, the Super Eagles."
Ifeanyi Emmanuel
Copyright ANS