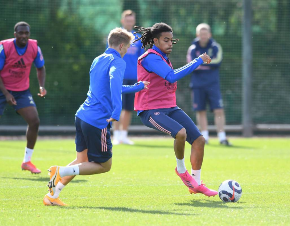 Four youngsters of Nigerian descent were promoted to first team training by manager Mikel Arteta ahead of Arsenal's Premier League clash against Chelsea at Stamford Bridge.
Left-back Tolaji Bola, center back Daniel Oyegoke, midfielder Miguel Azeez and striker Folarin Balogun participated in the Gunners final workout at London Colney on Tuesday.
Apart from Bola, who is 22 years,  the aforementioned Anglo-Nigerian players are teenagers.
The north London team have a remote chance of qualifying for next season's Europa League provided the teams above them drop points.
It is thought that Arteta would consider handing minutes to the young players in the squad in the final two matches of the season as they would have nothing to play for if they lose to Chelsea on Wednesday night.
Bola's only squad involvement for the first team was against Nottingham Forest in the third round of the League Cup in September 2019, though he was with the first team as the extra player for Premier League matches against Sheffield United and Bournemouth last season.
Oyegoke made his non-competitive debut for Arsenal in a pre-season friendly against MK Dons back in August 2020, but has not been named in a matchday squad for an official match.
Ifeanyi Emmanuel
Photo Credit : arsenal.com