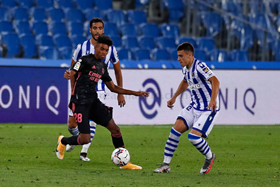 Marvin Akinlabi is in contention to make his fourth La Liga appearance of the season when Real Madrid face off with Granada at the Nuevo Los Cármenes Stadium on Thursday night.
Los Blancos coach Zinedine Zidane has announced a 20-man squad for the matchday 36 clash, meaning the Spanish-Nigerian starlet will certainly be included in the matchday squad, barring an injury in the pre-match warm-up.
Akinlabi is one of seven players classed as midfielders in Real Madrid's squad list, the others being Kroos, Modrić, Casemiro, Valverde, Isco and Blanco.
The 20-year-old and two other members of Real Madrid's UEFA Youth League-winning team have been picked.
Akinlabi was spotted training with the Real Madrid first teamers in their final training session in the Spanish capital before the trip to the Andalusian province.
Predominantly a winger who can be deployed as an emergency right wing-back, Akinlabi made his La Liga debut against Real Sociedad in September, before featuring against SD Huesca and Getafe.
He has appeared in eleven games for Raul's Real Madrid Castilla this term, scoring one goals and assisting another.
Ifeanyi Emmanuel
Photo Credit : realmadrid.com
Copyright ANS