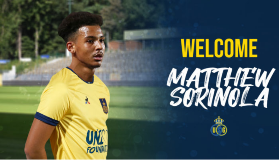 Belgian First Division B champions Royale Union Saint-Gilloise have pulled off a transfer coup by signing London-born Nigerian wing-back Matthew Sorinola.
The 11-time Belgian champions fended off interest from Scottish giants Rangers and Celtic to sign the 20-year-old.
Sorinola opted to try his luck abroad after rejecting a new deal at Milton Keynes Dons, whom he joined from Fulham in 2017.
The Anglo-Nigerian, who was also on the radar of Championship and Premier League clubs as well as German and French teams, has put pen to paper on a three-year contract with Royale Union Saint-Gilloise with an option for one year extra.
Several clubs had been battling for the signature of Sorinola after he put himself in the shop window with a string of fine displays in the League One and the highlight of his performance in the recently concluded season was his hat-trick of assists against Accrington Stanley in March.
He made a total of 43 appearances in all competitions and finished the campaign with a goal involvement of eight (2 goals, 6 assists).
Marshal Johnson, Ode Thompson, Michael Odibe, Jero Shakpoke and Prince Nake previously wore the colours of Royale Union Saint-Gilloise.
Igho Kingsley
Copyright ANS

All rights reserved. This material, and other digital content on this website, may not be reproduced, published, rewritten or redistributed in whole or in part without prior express written permission from allnigeriasoccer.com
Photo Credit : rusg.brussels