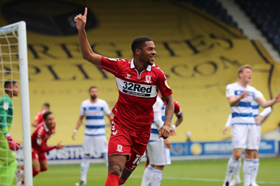 A number of Championship clubs are weighing up a move for Super Eagles hopeful Chuba Akpom, according to reports.
Teamtalk claims that the Arsenal-reared striker has been declared surplus to requirements at Middlesbrough ahead of next season.
Akpom did not quite hit the heights manager Neil Warnock expected of him in the recently concluded season, scoring only five goals in 39 appearances in all competitions following his summer move from PAOK in Greece.
The attacker's representatives led by Emeka Obasi have offered him to Millwall, Queens Park Rangers, Bristol City and Charlton Athletic.
With Akpom still under contract with Middlesbrough until at least June 2023, it has been decided that it would be best he joins one of the aforementioned clubs on loan.
Middlesbrough are likely to sign a replacement for Akpom before he is allowed to leave the club considering that fellow attackers Britt Assombalonga and Ashley Fletcher have been released.
A former England U21 international, Akpom previously wore the colours of Brentford, Coventry City, Nottingham Forest, Hull City, Brighton & Hove and Sint-Truiden apart from the aforementioned clubs.
Igho Kingsley
Photo Credit : mfc.co.uk
Copyright ANS