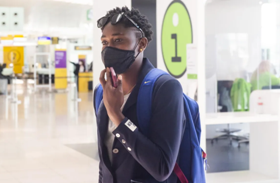 Nigeria captain Asisat Oshoala is seemingly in contention to be named in Barcelona's matchday squad when they take on Chelsea in the UEFA Women's Champions League final on Sunday, May 16.
The former Arsenal and Liverpool striker was named in a 23-player squad that arrived in Gothenburg on Friday evening.
Oshoala will have to undergo a late fitness test to determine if she will be available to face the current English champions.
Ten days ago, the four-time African Women's Footballer of the Year was diagnosed with a a sprained left ankle injury, putting her participation in the Champions League showpiece in doubt.
The 26-year-old sat out Barcelona's last two matches against Sevilla and Granadilla Tenerife due to her ailment.
Before her injury, the Super Falcons sensation had 15 goals in 21 league games and found the net four times in the Champions League.
Oshoala was in the Barcelona side that defeated Manchester City and Paris Saint-Germain in the quarterfinal and semifinal respectively of the Champions League.
The Nigeria international and her Blaugranes teammates will train at the Ullevi Stadium at 5.00pm CEST today, the venue for the final.
Igho Kingsley
Photo Credit : fcbarcelona.com
Copyright ANS