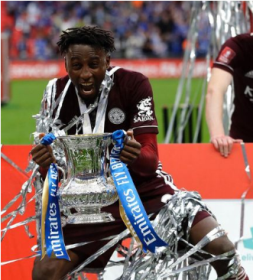 Leicester City have won their first-ever FA Cup after beating Chelsea 1-0 in Saturday evening's showpiece staged at Wembley Stadium.
Super Eagles duo Kelechi Iheanacho and Wilfred Ndidi were in action for 67 minutes and 90 minutes respectively for the Foxes.
In the fourth minute, Chelsea goalkeeper Kepa was able to snatch the ball away from Iheanacho as Jamie Vardy tried to cross for the in-form striker.
Chances were few and far between in the opening half with the two teams recording zero shots on target.
Belgium midfielder Youri Tielemans brought the game to life when he opened the scoring with a brilliant shot from 25 yards out in the 63rd minute, four minutes before Iheanacho made way for Maddison.
Chelsea thought they had scored in the closing minutes as Leicester City old boy Ben Chilwell forced an own goal from Wes Morgan but the goal was disallowed after a VAR review.
Former Manchester United striker Dion Dublin namechecked Ndidi and Iheanacho among the Leicester City players that have impressed him this season and predicted that the Foxes will play more finals in the future.
"It's a little bit of patience that Brendan Rodgers has shown with his younger players and the senior players got on board with what he wanted," Dublin said on BBC Radio 5 Live.

"Jonny Evans, what a very good player he has been, Vardy and Ihenacho have been outstanding and Tielemans and Ndidi, have been part of that defensive midfield that works.

"Leicester have got it right and Brendan Rodgers has got it right. I don't think this is a one-off, I think they will be in this situation quite a few times."
Iheanacho and Ndidi were involved in every single game played by Leicester City in the FA Cup, with the attacker scoring four goals and providing an assist.
Ifeanyi Emmanuel
Copyright ANS