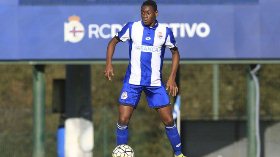 Belgian club Racing Genk are in advanced talks to sign Nigeria-eligible center back Mujaid Sadick, according to matching press reports in Spain and Belgium.
Spanish newspaper La Opinion A Coruna says Segunda División B club Deportivo de La Coruña have agreed to transfer the defender to Genk in exchange for 1.7 million euros and the fee could rise with bonuses.
Sadick was left out of Deportivo de La Coruña's matchday squad for their last league match at Numancia due to his imminent departure from the club.
Sadick became the youngest player of Nigerian descent to feature in La Liga, when he made his top-flight debut for Deportivo La Coruña against Villarreal on May 12, 2018, aged 18 years and 59 days , beating the record previously held by Isaac Success in the process.
Born in Logroño, Spain, he is eligible to play international football for the national teams of Ghana, Nigeria and Spain.
This season, Sadick has started 23 of the 24 matches he was involved in for Deportivo de La Coruña.
Regarded as the best center back in the Segunda División B, the 21-year-old has been on the books of Los Blanquiazules since 2016 after switching from Valvanera.
Ifeanyi Emmanuel
Photo Credit : rcdeportivo.es
Copyright ANS