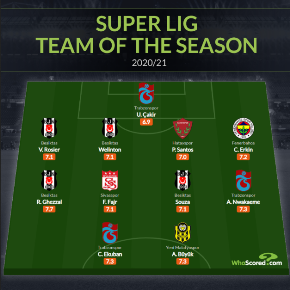 Former Super Eagles invitee Anthony Nwakaeme has been named to the Turkish Super Lig Team of the Season by football statistics website Whoscored.com.
In the recently concluded season, Nwakaeme appeared in 34 matches in the top-flight, scoring seven goals and setting up seven others while logging 2,970 minutes.
He averaged 3.1 shots per game, had a passing accuracy of 79 percent, was named Man of the Match on five occasions, made 1.2 key passes per game, and averaged 2.9 dribbles.
Defensively, Nwakaeme made 1.6 tackles, 0.8 interceptions and one clearance per game.
In the Team of the Season, the 32-year-old was deployed as a left-sided midfielder in a 4-4-2 formation.
Of the eleven players picked, only Leicester City loanee Rachid Ghezzal (7.7) was rater higher than Nwakaeme (7.3).
Nwakaeme made his Super Eagles debut in a World Cup qualifier against Algeria in November 2017 but the game is not recognized by FIFA as Nigeria fielded an ineligible player.
Igho Kingsley
Copyright ANS