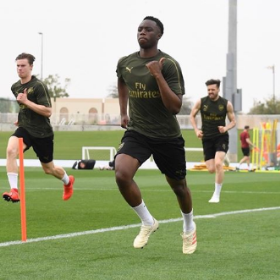 Through their official website, relegated League Two club Southend United have announced their retained and released list following the conclusion of the 2020-2021 season.
The Seasiders have confirmed that Nigeria-eligible midfielder James Olayinka has returned to his parent club Arsenal.
The Hale End Academy product initially arrived Southend United on loan in October 2020 until January 2021 but the loan was extended until the end of the season.
Olayinka departs Southend United with 21 games under his belt in all competitions, scoring three goals and was in action for 1,524 minutes.
His appearances were few and far between in the second half of the season due to an ankle injury he suffered in January.
Meanwhile, center forward Simeon Akinola is one of the nine players under contract with Southend United until at least the end of the 2021-2022 campaign, while the club have taken up the option for teenage midfielder Terrell Egbiri.
Igho Kingsley
Photo Credit : arsenal.com
Copyright ANS