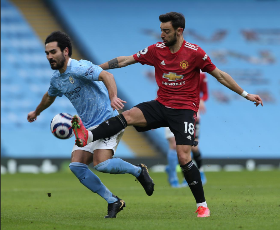 Manchester United and Manchester City are two of the biggest football clubs in the world.
Whenever these two sides come up against each other, soccer enthusiasts get to watch a great sporting spectacle.
The exciting matches between these two great rivals also provide a very good betting opportunity for punters who use the lucky 15 calculator to work out their winnings.
1- Manchester United 3, Manchester City 2 (2018)
Manchester City set several Premier League records during the 2017-18 campaign. They looked unstoppable during that season and went on crushing one opponent after another on their way to the league crown.
Pep Guardiola’s side entered the Etihad contest as heavy favourites, with the Citizens suffering only one defeat at the hands of Liverpool by then. Manchester United were also running in good form, but their derby rivals looked to have no comparison with any other team.
The first half of the game was in line with the expectations of the spectators. The home side started dominating proceedings and found themselves ahead in the 25th minute, with captain Vincent Kompany scoring with a brilliant header.
They didn’t give their fierce rivals any respite and struck within the next five minutes through Ilkay Gundogan.
City’s score-line would have been more emphatic if Raheem Sterling and Gundogan hadn’t squandered good scoring opportunities.
And Manchester United made them pay for their mistakes after the interval when they came out with new energy and vigour.
Star footballer Paul Pogba pulled one back in the 53rd minute before immediately adding another to pull his side level with the Sky Blues. And then in the 69th minute, Chris Smalling popped up with the winner to complete United’s remarkable turnaround.
Pep Guardiola’s men attacked furiously but the Red Devils stood firm and ultimately went on to win by 3-2.
2- Manchester United 1, Manchester City 6 (2011)
Manchester City couldn’t be compared with their mighty rivals Manchester United before 2008. However, the club was taken over by the Abu Dhabi United Group that same year and things changed quickly for them.
Over the years, they spent hefty sums to bring some of the best footballers in the world. By 2011, the team had become formidable, boasting plenty of star players.
And in the Manchester derby in October, they showed their real strength and power.
City outplayed United in every department and left then-manager Sir Alex Ferguson ruing his ‘worst ever day’ in charge of the club.
Surprisingly, United looked the better side in the opening part of the game, with Ashley Young giving Micah Richards and James Milner a hard time.
It was against the run of play when Mario Balotelli struck after 22 minutes.
However, the real destruction for the Red Devils came in the second half when City pounded them with plenty of goals.
Balotelli got on the scoresheet again before Sergio Aguero, one of the best strikers in premier league, extended the score-line with an easy goal.
United tried to make a feeble comeback attempt by reducing the deficit through Darren Fletcher’s strike.
However, substitute Edin Dzeko put the match beyond the Red Devils by adding two quick goals, while David Silva also earned his name on the scoresheet to make it a memorable victory for the Cityzens.
Photo Credit : manutd.com