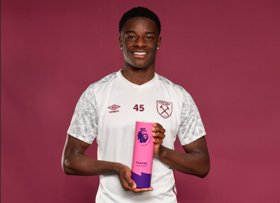 West Ham striker Mipo Odubeko has been named Premier League 2 Player of the Month for April 2021.
Odubeko saw off competition from Danny Cashman (Brighton & Hove Albion), Josh Hawkes (Sunderland), Dilan Markanday (Spurs), Cole Palmer (Manchester City) and Crysencio Summerville (Leeds United) to win the monthly accolade.
He is the second player of Nigerian descent to win the Premier League Player of the Month this season after Red Devils youngster Shola Shoretire.
Last month, the 18-year-old scored five goals in four appearances for the Hammers U23 side in the Premier League 2, including a hat-trick against his former club Manchester United.
"It feels good to win this award. The targets that I set helped me get to this award, so I’m thankful for that," Odubeko told West Ham's official website.

"The U23s went into the month of April knowing what we had to do. We had four tough games – Chelsea, Manchester United, Everton, and Manchester City – and we were fighting relegation. We got a few big results.

"The objective of the team was just to stay up. Luckily, I was able to provide goals and help the team do that. I’m happy that I could play my part in helping the team."
Odubeko has been involved in two matches for West Ham's first team this season - both coming in the Emirates FA Cup - and was named in the matchday squad for Premier League games on sixteen occasions this season.
Ifeanyi Emmanuel